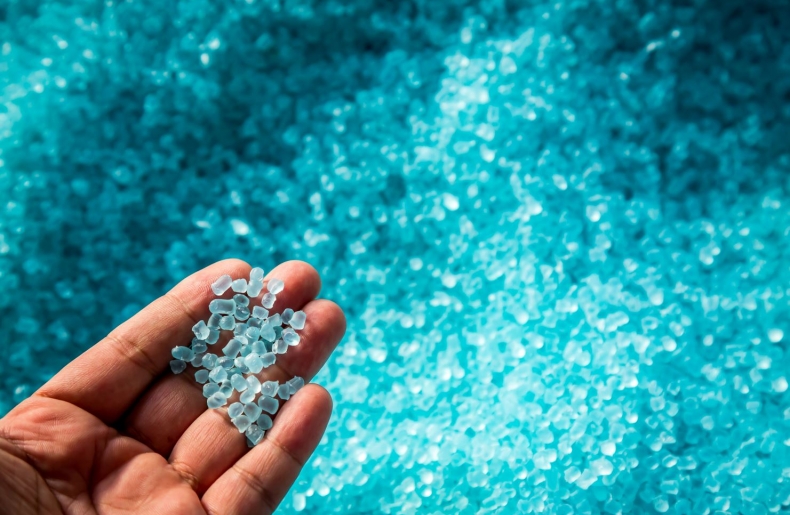 The focus of sustainability has shifted in the past decade—from a biobased model based upon carbon-14 content to a carbon intensity based model, based upon the emissions resulting from the production of the product.  This may mean that a biobased alternative will be the most sustainable, but not in all cases.  Increasingly, many major market players including most international energy companies, chemical companies, and logistics and shipping companies have stated intentions of reducing their carbon intensity.   A majority have even stated ambitions of net zero carbon emissions by 2050 and expect either a tax on carbon emissions or a credit for reductions.    Increasingly, the financial sector is weighing carbon emissions in investment and are unwilling to fund what they see as ‘dirty projects’.

What is Carbon Intensity?

Carbon Intensity is the measure of how much carbon dioxide equivalent emissions is released per unit of product (ton, MJ, or MWh, depending if it is a chemical, power, or fuel).  These can be divided into three buckets of emissions: Scope 1 or Direct Emissions, Scope 2 or Indirect Emissions, and Scope 3 or Other emissions. 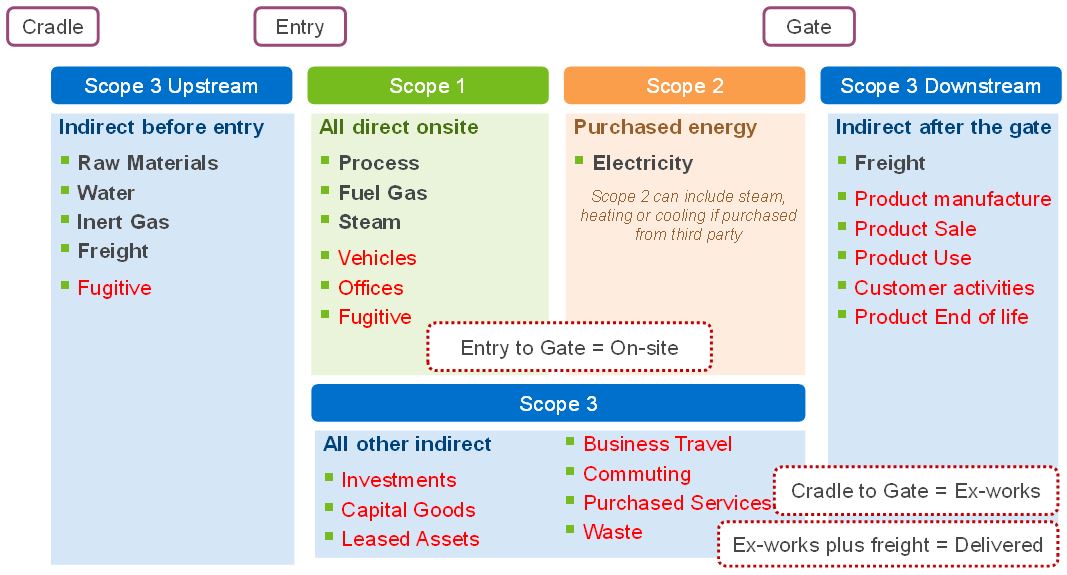 Many promises of carbon neutrality are focused on Scope 1 and Scope 2 emissions, as these are the most in the direct control of the producing companies.

The Difficulty with Ethylene

Withing the chemical industry, there are three chemicals that are the largest emitters: ammonia, methanol, and ethylene.  While many are pursing options for low carbon intensity ammonia and methanol, the options are far fewer.  Ethylene is a major feedstock for additional chemistry, including polymers, surfactants, and higher olefins – all will be impacted by changes in ethylene’s carbon intensity. Several different options are emerging for low carbon intensity ethylene, including several utilizing the existing value chain and infrastructure, each with different carbon intensities. These include routes that continue to utilize petrochemical feedstocks such as:

Methanol and the utilities for the downstream MTO processes (e.g., power and steam), depending upon the region can be produced from natural gas or coal (e.g., including CTO in China), which can make the carbon footprint vary widely.  Additionally, A significant proportion of ethylene’s emissions are scope 1 emissions due to the heating required, making it a good potential candidate for carbon capture, or switching to electric heating and renewable power while continuing to utilize the same feedstock, however these can also be used with emerging routes utilizing renewable feedstocks to minimize carbon intensity.  These include: 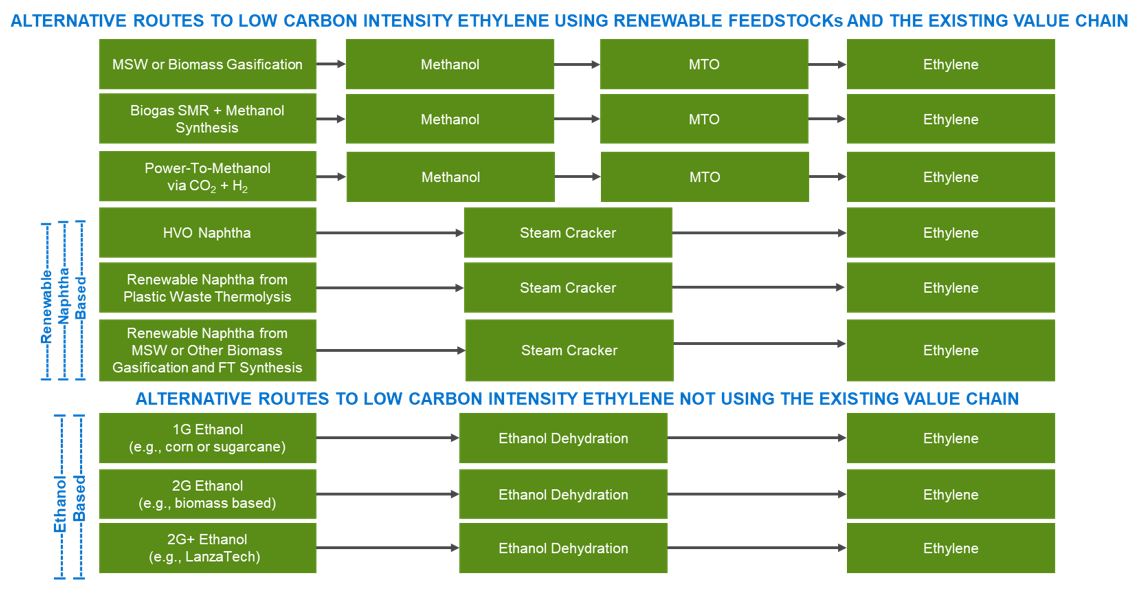 Each category of solutions comes with its own advantages and disadvantages: 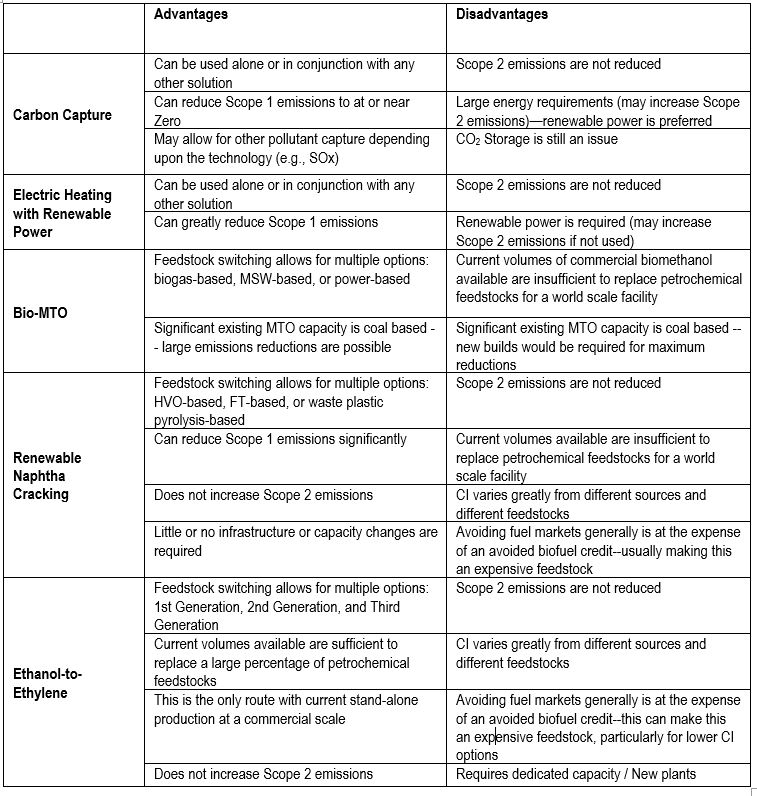 Due to the multitude of options available, combined with the regional differences in carbon intensity of the feedstocks and feedstocks available, regional differences in regulatory outlooks, and company level differences between what carbon neutrality means and what the timeframe is for it, there will likely be no one size fits all solution for all producers.  Solutions will likely include some or all of these in one way shape or form – the death of the carbon intensity of ethylene will be one of a thousand papercuts-- and most ethylene players are widely partnering in projects across the spectrum to cover their bases as the industry lurches forward into unknown waters, driven by the appetite of their customers for more sustainable products.   To help producers and consumers understand the space and help navigate these changes, NexantECA is studying these routes and comparing their relative cost of production and carbon intensities in various regions, with specific country level analysis available as an add-on.

Low Carbon Intensity Ethylene - A Technoeconomic and Carbon Intensity Study This report compares the various options for lowering carbon intensity of ethylene production via technoeconomic, carbon intensity, and strategic analysis. Regional cost and carbon intensity baselines, comparative carbon intensities (including breakdown and analysis by Scope 1, 2, and 3 Emissions) of decarbonization configurations, cost of productions, and impacts of carbon tax/credits on competitiveness (including break-even values) are analyzed across four regions: US, Brazil, China, and Western Europe. Additional regions/countries are available as an add-on.