Arjun Gupta is the Executive Chairman of NexantECA, and Chief Believer at TeleSoft Partners, a special situations venture capital firm in Silicon Valley. Over the last twenty five years, he has invested in and helped build over 85 technology companies, of which over 50 companies have been acquired or gone public (combined market cap over $750 billion). Recognizable brands include DocuSign, Salesforce, T-Mobile USA, Uber, and others. He was on the Forbes Midas List of Top-100 Venture Investors in 2006, 2007, 2008, and 2009. Prior to Telesoft, Arjun was at McKinsey & Company where his clients included Apple, AT&T/PacBell, Verizon/PacTel, and others. He was part of the Digital Transition Project for LA which launched Qualcomm CMDA against the industry standard of TDMA. He was also part of the Paradigm Project which led to the spinoff of General Magic from Apple. He started his career at Tektronix, Inc., initially as an operating systems software engineer, then a field applications engineer, and finally a product specialist covering new product introductions in the US, Germany, and Japan. Arjun loves developing and scaling great technology products.

In 2001, Arjun launched a family foundation to support education, conservation and the performing arts. The foundation has supported over 100 projects in America, India, and Africa.  Arjun is a Trustee of Aspen Institute and the Aspen Music Festival. He is a co-founder and co-chair of YPO Gold Aspen. Arjun is an avid outdoorsman. He has skied to the North Pole and to the South Pole, and was recently appointed a UN Mountain Partnership Ambassador to help with climate change initiatives. Since 2013, Arjun has been a member of the new ownership group of the Sacramento Kings NBA basketball team.

Arjun received his MBA from Stanford University, an MS and BS (Phi Beta Kappa) in computer science from WSU, and a BA (Honors) in economics from St. Stephen’s College (India). He is an ALI Fellow at Harvard University and a Henry Crown Fellow at the Aspen Institute. Arjun lives in Aspen and in San Francisco. 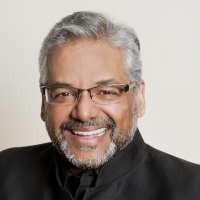