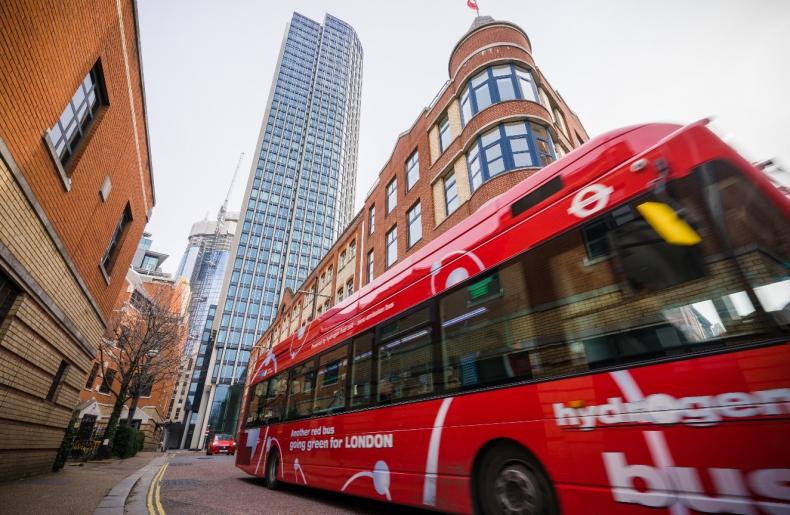 Wuppertal, in the German state of Nordrhein Westfahlen has been a pioneer of transportation since the construction of the suspended railway, or Schwebebahn, in the late 1800’s. In the run-up to its opening in 1900, engineers used 20,000 tonnes of steel to construct the Schwebebahn. This suspended railway is unique in Germany and operates on a 13km route along the river Wupper to the east and west of the town of Wuppertal. Today, passengers use the transportation system for 25 million journeys per year.

120 years after the Wuppertal’s Schwebebahn opened, the city is putting iFtself on the map again for its innovative approach to mobility. Green hydrogen produced from the incineration of municipal waste will be used as an energy vector to power a fleet of fuel cell electric buses (FVEBs). This sector coupling concept, using hydrogen to link rubbish disposal to emissions-free public transport is one of many projects underway in the Hydrogen Competence Region taking place in Wuppertal, Düsseldorf and other towns in Nordrhein Westfahlen.

One thousand buses operate in the region and many of them will switch from diesel power to emissions-free hydrogen as a fuel. The first ten A330 FC fuel cell and hydrogen-powered buses arrived in Wuppertal in 2019 from the Belgian manufacturer Van Hool and more arrived in 2020. Each 12m long double-axle bus can carry 75 passengers and is equipped with an 85 kW Ballard Power Systems fuel cell to convert the hydrogen to motive force. For every ten FCEBs on the road, around 700 tonnes per year of carbon dioxide emissions from diesel fuel combustion can be eliminated.

In the overall project budget of approximately €12 million, just over half will be allocated to the purchase of the new buses and the remainder has been allocated to the implementation of the hydrogen production, storage and fuelling system. The hydrogen for the FCEBs will be produced on a 1.25MW electrolyser supplied by the Canadian company Hydrogenics, part of Cummins Inc.

Integral to the system design is a high-pressure hydrogen gas buffer storage capacity of 425kg. This storage enables faster fuelling of multiple buses in rapid succession. It also means that the electrolyser can be run intermittently, operating only at times when the cash value of exporting electricity to the local grid is low. This means that the hydrogen production equipment is slightly ‘over-sized’ compared to a system that would operate continuously, but it makes the overall system economics significantly more attractive and improves the value of the investment in the mid and long-term.

The gas compression system and fuelling dispensers for the hydrogen supply will be manufactured by Maximator at their factory in Nordhausen, approximately 300km due east of Wuppertal in the state of Thüringen. Maximator also played the leading role in the hydrogen production, storage and fuelling concept design, systems integration and project management.

The electrical power for the electrolysis will be generated from the combustion of around 1000 tonnes per day of municipal solid waste collected from local businesses and approximately 1.5 million people in the region.

Households in Wuppertal use four bins for their waste: one for paper and cardboard, another for green waste from the garden or food scraps from the kitchen a third for packaging such as plastic bags and a fourth bin for ‘everything else’ or ‘Restmüll’. The paper, packaging and green waste all go their separate ways for appropriate processing. Only the Restmüll - the most difficult rubbish to dispose of in other ways - is used as feedstock to the waste-incinerator.

Despite the removal of the green and paper material by the households, the Restmüll from local residents still has a biomass content of more than 50% which is derived from things such as paper tissues and food scraps. Using this feedstock and carbon dioxide emissions trading, the electricity generated on the Wuppertal waste incinerator can therefore be classified as ‘Green’. This enables the hydrogen produced on the electrolyser to carry the same environmentally friendly credentials.

The Wuppertal waste incinerator was purpose-built for power generation from the combustion of municipal solid waste. It entered service in 1974 and is fitted with two 20MW power generation turbines.

The Wuppertal scheme is already planned to be replicated in the town of Herten, 50 km north of Wuppertal. Every year, around 650 000 tonnes of domestic, trade and industrial waste are burned in the RZR Herten waste incineration power station. This represents a significant contribution to a positive carbon dioxide balance because the operation of the waste power plant saves immense amounts of fossil fuels and therefore reduces the overall environmental impact of power generation in the region.

Put into operation in 1982, the Herten power station consists of six incineration lines, which ensures optimal thermal treatment of the municipal solid waste. To ensure that emissions are kept well under control, the flue gas scrubber incorporates a sophisticated filter that makes sure that the power plant's emissions are normally only less than ten percent of the legal limit.

As these regional schemes develop, hydrogen mobility applications could extend to the local taxi fleets as they convert to fuel cell electric vehicles (FCEVs). Düsseldorf airport could also become a low emissions mobility zone with the conversion of 2000 aviation logistics and materials handling vehicles, such as baggage cart tractors and aeroplane pushback tugs. These currently operate on diesel fuel, but conversion of their power trains to hydrogen-powered fuel cells would be possible.

And, of course, the lessons from Wuppertal can travel internationally. In central London, Transport for London has committed to the use of electric or hydrogen buses for all its 300 single decker buses and the use of hybrid buses for all 3,000 double-decker buses that operate in that zone. This initiative is aligned with the implementation of the Ultra-Low Emissions Zone. The source of the hydrogen for these buses is not yet fully green, but future developments in that direction will surely unfold.