China - Poised to dethrone the U.S. as the world’s largest refiner 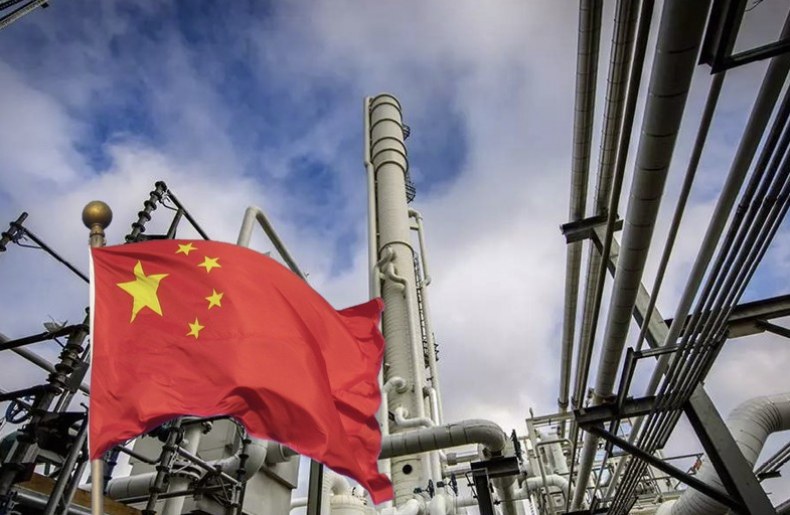 China is poised to dethrone the U.S. as the world’s largest refiner. How has it got there and where will it go from here?

Over the last two decades, China’s emergence economically and geopolitically has been supported by, and has in turn encouraged, vastly increased consumption of refined petroleum products and petrochemicals.  To supply this growing need, the Chinese petroleum refining and petrochemicals industries have experienced fundamental structural changes, as capital investment and production has expanded significantly, with increased levels of industry integration and development of related industries.  At the same time, the industry has continued to evolve from being primarily state-owned, towards a model in which privately controlled independents as well as joint ventures involving international companies, operating alongside state owned companies in some parts of the industry. 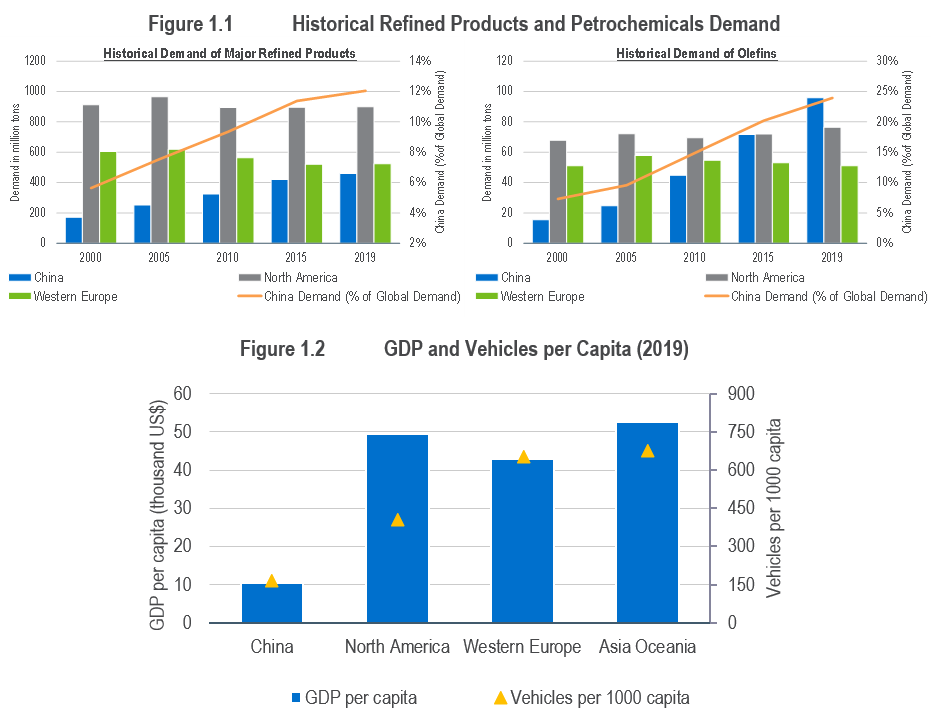 The National Oil Companies (NOCs), established in the 1980s have grown to subsequently dominate the oil and gas upstream and downstream oil sectors.  The three major NOCs are China National Petroleum Corporation (CNPC or “PetroChina”), China Petroleum and Chemical Corporation (Sinopec), and China National Offshore Oil Corporation (CNOOC).  PetroChina and Sinopec were granted the right to trade in both domestic and international markets and were allowed to expand their marketing activities, including retail businesses in each other’s territories.  Several other state-owned oil firms and private companies have emerged and expanded their presence in China petroleum and petrochemicals industry including Sinochem Corporation and the provincially owned Yanchang Petroleum, amongst others.

Driven by the strong growth in refined products demand due to a rapidly growing economy, China’s refining capacity has grown from 10.5 million barrels per day (BPD) in 2010 to 15.5 million BPD in 2019.  China’s refining capacity addition in the past decade of around five million BPD is around half of total refining capacity addition globally within the same period.  To put into perspective, this level of refining capacity growth with average annual capacity addition of 5 million BPD, is equivalent to adding one to two world scale grass root refineries every year.  Sinopec and PetroChina, own a significant majority of China’s overall refining capacity, accounting for 38 percent and 26 percent, respectively, including their ownership shares in their respective joint ventures.  Other state-owned companies such as CNOOC and Sinochem have invested significantly in refining capacity to compete in the domestic refining market in line with the Chinese government’s aim of encouraging vertical integration and diversification amongst the state-owned companies.  In addition, the emergence of the independent refining sector in recent years has also led to Sinopec and PetroChina’s shares of overall production declining.  International companies’ presence in the refining sector remains limited.  TOTAL has a stake in WEPEC refinery in Dalian, Exxon Mobil and Saudi Aramco have ownership in the FREP refinery Quanzhou.  Saudi Aramco is in discussion to acquire a nine percent stake in Zhejiang Petrochemicals. 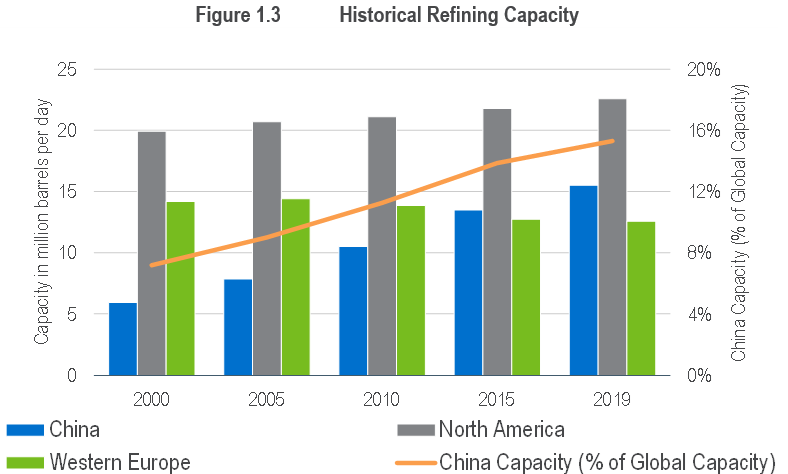 In recent years, capacity additions by Sinopec and PetroChina have been dwarfed by the overall expansions undertaken by the independent refinery sector.  The Chinese Government’s decision to allow the independent refining sector to import crude oil in 2015 resulted in transforming the fortunes of the independent refining sector which had historically suffered from poor refining margins and low operating rates and relied partly on tax loopholes and the support of local governments to continue operating.  Independent refiners have subsequently taken steps to expand and modernize their facilities, while enhancing integration both upstream and downstream through alliances with state-owned refiners and other independent refiners.  The main notable recent refining capacity additions from the independents are Hengli Petrochemicals in Dalian and Zhejiang Petrochemicals in Zhejiang, both similar in capacity at 400 000 BPD.  Both facilities commenced operations in 2019, driven by the owners’ ambitions to back integrate and grow their existing polyester chain investments by securing additional feedstock supplies – a similar pathway adopted by Reliance in India 20 years ago.  Both facilities have the capability to produce yields of up to 40-50 weight percent of petrochemicals, substantially higher than most refineries globally. 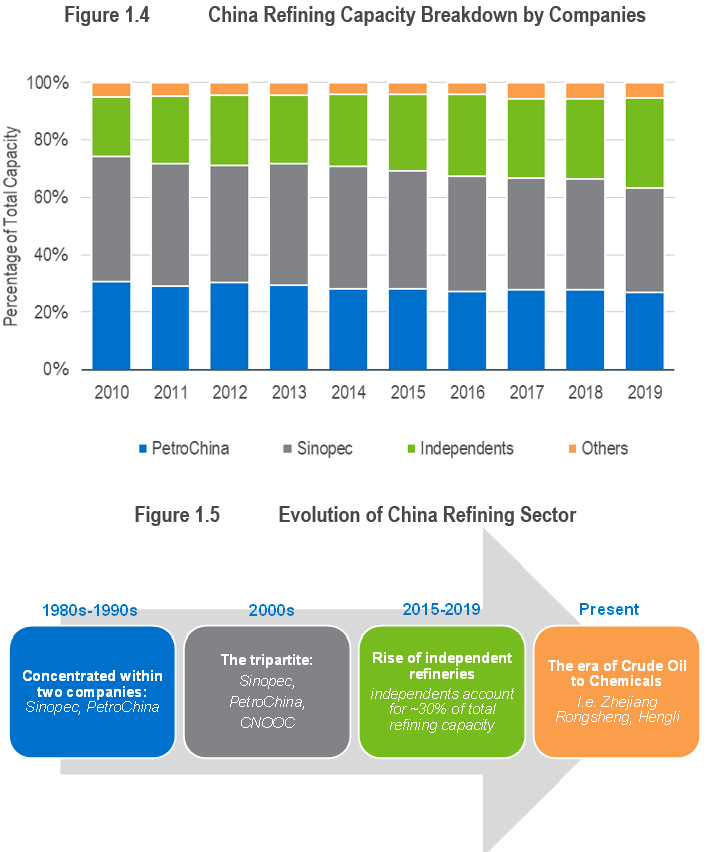 The COVID-19 pandemic has negatively affected the global refining industry, with short to medium term market uncertainties, price volatility, and capacity closures announcements.  In the first half of 2020, Petrochina and Sinopec reported operating losses of RMB 14 billion and RMB 32 billion respectively in the refining segment, as compared to operating profits during the same period in 2019.  However, there has so far been no high-profile cancellations in refining projects in China.  Most planned refining capacity additions continue to progress in China.  This has been driven by projects construction status making delays expensive, the rapid recovery from lockdown effects and the drive to pursue petrochemicals integration to substitute imports.

Sinopec began operation at its Zhongke refinery and petrochemicals complex with refining capacity of 200 000 BPD, a project designed to complement its existing, adjacent 100 000 BPD Dongxing Petrochemical refinery to increase scale and competitiveness.  Zhejiang Petrochemical is progressing with its Phase 2 project, which will double its current capacity.  Commercial operation is expected in 2021.

Saudi Aramco has suspended its participation in Huajin Aramco Petrochemical Co., a 300 000 BPD refining petrochemicals project, although the Chinese shareholders are reportedly pressing ahead with the project. Shenghong Petrochemical is constructing a 320 000 BPD refinery and petrochemicals complex in Lianyungang.  A 400 000 BPD refining project by Yulong Petrochemical in China’s independent refineries heartland, Shandong province, is being revived after being mooted many years ago.  This project is approved with the plan to shut down small and uncompetitive refineries in Shandong of around 500 000 BPD, which is roughly 20 percent of Shandong’s refining capacity.  The realisation of this plan remains uncertain as it would likely comes down to reaching agreements on compensation for permanent closures.  Historically some of these independent refineries have proven to be resilient, surviving tough market and unfavourable regulatory conditions.

Around 2.3 million BPD of new capacity is expected to startup between 2021 and 2024, although this may be accompanied by the closure of some small, old, inefficient refining capacity. 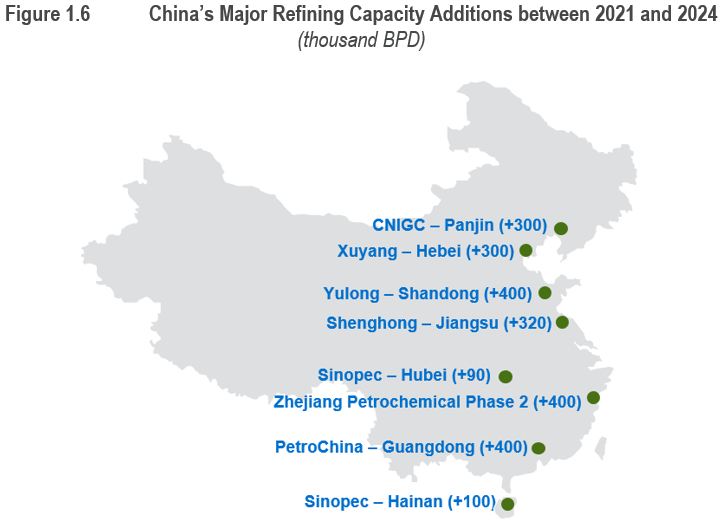 China’s domestic gasoline demand growth has been slowing in recent years, which is partly contributed by the significant increase in the number of electric vehicles (EVs) in the country.  China’s gasoline demand CAGR between 2010 and 2015 was above 10 percent, but annual demand growth has been less than five percent annually since 2016.  China has the largest number of electric vehicles (EV) in the world, accounting for nearly half of the world’s total EV fleet in 2019.  EV uptake in China is expected to continue growing in the future, supported by the continuation of EV purchase subsidies until 2022 and the recent launch of a New Energy Vehicle (NEV) Industry Plan for 2021 – 2035.  The NEV Industry Plan includes a target to raise the proportion of NEVs in the sales of new vehicles to 20 percent by 2025, roadmaps to improve capability for NEV technological innovation and the development of a robust EV battery supply chain.  The long-term outlook for gasoline demand in China will depend on how the country balances between its reliance on oil-derived gasoline for transportation against the cost of investing in EVs, public transport infrastructure and alternative fuels.  The prospect of diesel demand in China is better than gasoline, as diesel is a more versatile fuel used in various sectors.

As refining capacity additions have recently outpaced domestic fuel demand growth, China has been increasing its exports of gasoline, diesel and jet fuel, with more than 80 percent of the exports flowing within Asia. 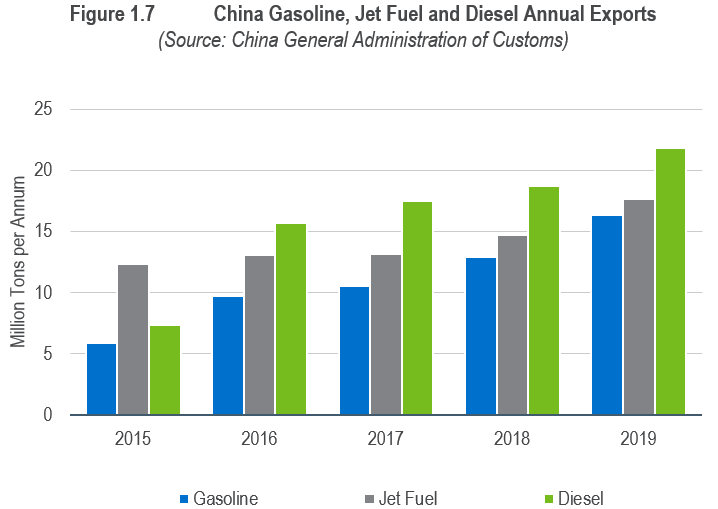 To maintain fuel supplies, fuel exports out of China have historically been controlled by the government via the issuance of fuel export quotas, which are usually granted only to major state-owned oil companies.  In July 2020 China granted Zhejiang Petrochemicals licence to export refined oil products, making it the first private oil refiner to obtain such approval.  This move is broadly perceived as the government’s effort to ease the oversupply of fuel products in the domestic market, especially with new refining capacity additions starting up.

A potential demand outlet for its refineries which China is attempting to develop is the international bunkering sector.  Historically China has been a net bunker fuel oil importer as domestic refineries choose to minimize fuel oil production due to unfavourable taxes levied onto products sold to the bunker market.  Earlier this year, the government announced value added tax rebate on fuel oil exports to the bonded bunker market, hence providing a more level playing for domestic producers versus imports.  The government is planning to develop Zhoushan, and several other ports, into a regional key bunkering hubs.  The roll out of the IMO 2020 regulations has increased global demand for very low sulphur fuel oil (VLSFO), of which several major Chinese refiners have invested to produce.  China has issued the first batch of VLSFO export quotas comprising 10 million tons for 2020, with an additional 5 million tons expected to be allocated.  This is expected to provide competition to Asian regional bunker hubs such as Singapore.

Majority of the new refining capacity additions in China in the near term are geared towards the production of petrochemicals.  The resultant increase in transportation fuel supply will not be fully absorbed by the domestic market, and as such fuel exports out of China are expected to increase.  Poor refining margins brought about by the Covid-19 pandemic may result in the closure of more small and uncompetitive refineries in the region, therefore presenting China with potential target markets to export refined products to.  However, while China is one of the first economies to show recovery from the Covid-19 virus, other countries in Asia are still battling with the second or third wave of the pandemic.  The outlook for refined products demand in the region and the impact of China’s upcoming new refinery projects will depend on how soon the world, in particular Asia, can bring the pandemic under control.

In view of recent challenges facing China’s refining industry, what is the prospect and key challenges moving forward? NexantECA has extensive in-house data and deep expertise in China and the Asian refining industry.  Some of the selected areas we can provide analysis:

Our latest report Market Analytics: Refined Products - 2020 provides an analysis and forecast to 2045 of supply and demand of the global refined products industry including LPG, naphtha, gasoline, kero/jet fuel, diesel/gas oil and residual fuel.  Minor products such as lubricants, waxes, etc are excluded from this report.