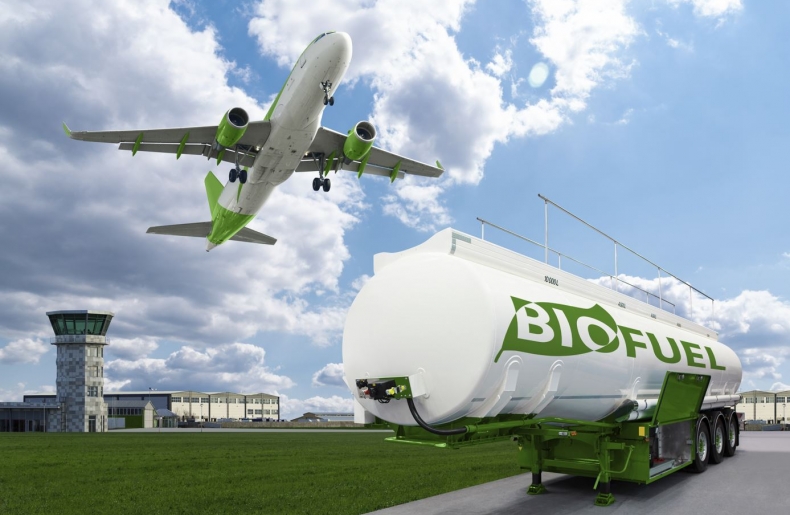 Of the various routes to renewable “drop-in” alternatives to established petroleum products, the most advanced in terms of commercial scale and momentum are Hydrotreated Vegetable Oils, or HVO, processes.  In fact, the term HVO is something of a misnomer, as this technology is able to use a wide range of feedstocks.  HVO plants increasingly process animal fats, in the form of tallows, and waste oils, in the form of used cooking oils (UCO).  In fact, HVO processing routes have the ability to easily accept feedstocks that conventional (Methyl Ester, or ME) biodiesel technologies find challenging (requiring process modification to avoid soap formation) due to high levels of FFAs.

HVO processes produce a range of drop-in fuels, led by diesel (known as renewable or green diesel) and jet fuel (known as Sustainable Aviation Fuel or SAF).  While the major focus of current production is on the diesel fraction, interest in SAF is growing very rapidly – thanks to a raft of regulatory and industry-driven initiatives to decarbonize aviation – and is driving capacity growth.  Other key products are naphtha and propane.  HVO-derived naphtha may be used as a renewable gasoline blendstock or fed to a steam cracker for olefins production, allowing a degree of renewable penetration into plastics production.  HVO-derived propane, meanwhile, is produced as a byproduct via the conversion of glycerine produced by the process (by contrast, ME biodiesel production is only able to produce crude glycerine as a byproduct).  This propane can be used as fuel as LPG or sent to a propane dehydrogenation (PDH) unit to produce propylene.

Shifting ground: From bio-based to sustainability in focus

Around 15 years ago, when the green fuels market began to take root, the main focus for regulators and producers was on ensuring the bio-based content of fuels.  Key regulatory frameworks – notably the Renewable Fuels Standard in the U.S. and the 2003 Biofuels Directive in the EU – incentivized bio-based production via overall biofuels targets.

However, while bio-based content generally is an indication that a process will be less carbon intensive than conventional (petroleum-based) production, it is not a guarantee of reduced emissions.  Nor will all bio-based fuels necessarily be sustainable. Sustainability is measured on three metrics (called the 3 P’s): ecological impact (Planet), societal impact (People), and economic impact (Profit).  Recognizing the need for solutions that are profitable and generate the most beneficial impact, regulations around the world have changed to accommodate incentivizing the “most good”.

Therefore, recently, legislation such as California and other States’ LCFS programs and the EU’s RED II framework has incentivized sustainable fuels based upon the degree to which their carbon intensity (or CI, measured in g CO2 eq per MJ) is reduced compared to the conventional standard.   This has led to increasing demand for low CI feedstocks such as waste oils and tallow.   In systems such as the LCFS, credit values for HVO products can be quite high; the additive value of RINs earned under the RFS and LCFS credits can in fact exceed the value of the fuel sold, given a low enough CI for the products.  In some cases, the value gained by offering low CI fuels to the market is sufficient that less valuable byproducts (e.g. bionaphtha or bioLPG fractions) are burned in the production process or used to produce low CI green hydrogen via conventional reforming technologies, avoiding the use of fossil fuel inputs and raising the credit value of renewable diesel or SAF production.

HVO, due to the nature of the technology, is well suited to use in conventional petroleum refineries. At a time when gasoline demand has been on a significant decline, HVO offers an alternative use for some refining equipment (with some modifications), allowing refiners to produce sustainable renewable fuels instead of maximizing gasoline production.

This is proving alluring to many refiners who are doing just this.  Refineries owned by BP, TotalEnergies, ENI, Kern, and Repsol among others now co-process and/or produce HVO products.

Almost 15 years ago, when the RFS first reared its head, the HVO market was just planting its seeds, with only a handful of companies tinkering with hydrogen and oils.  There are now well over 25 HVO plants around the world, and plans are in place for over double that in the next 15 years, including the construction of large scale standalone plants and a large number of retrofitting projects at existing petroleum refineries.

Helping to fuel this rapid expansion is HVO’s relatively low capital costs when compared to other sustainable fuels production, and its high margins (due to high credit values).  Modeled returns are currently exceptional for producers.

NexantECA’s modelling of the HVO industry (shown below for full year 2020) shows a robust cost curve with some very low cash costs, capable of generating very high margins and returns.  A combination of feedstock selection, target market, and process technology are the main drivers of individual plant production cost.  Currently, there are HVO plants in North America, Europe, and Asia, with plans for capacity in South America (representing a large opportunity). 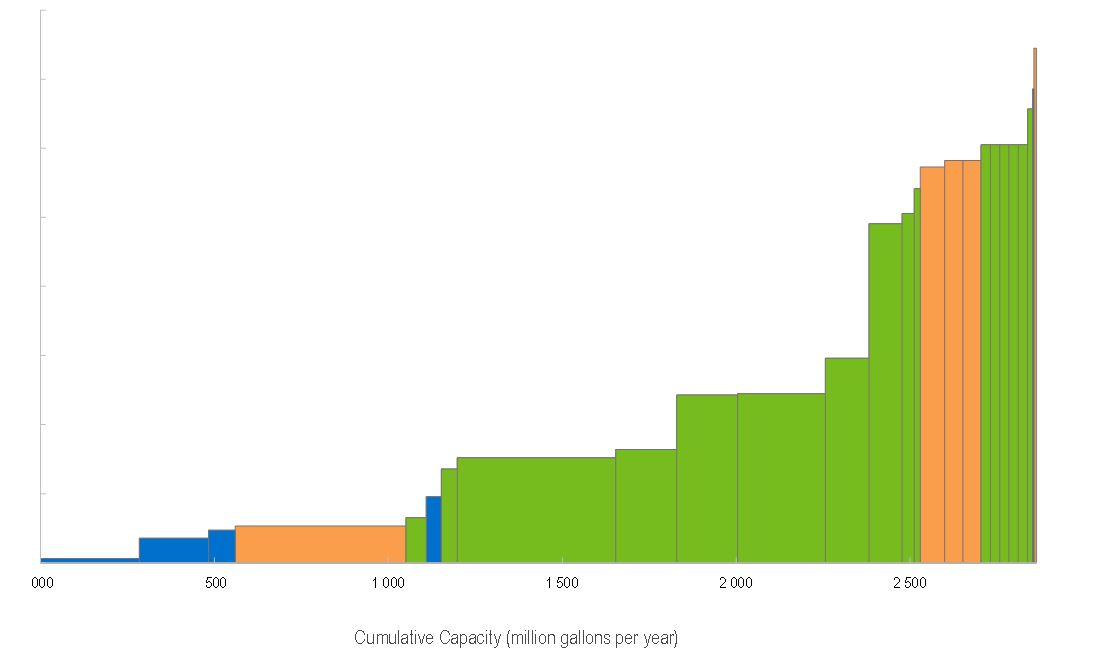 HVO for SAF taking off: The non-recourse biofuel

What was once FAME biodiesel’s ‘annoying little brother’ is now rapidly expanding to a point where it will likely overtake biodiesel as a preferred product in various markets and applications. And while the market for renewable diesel is and continues to be the largest by far of all of the HVO products, there is now significant interest as a solution for lowering the carbon intensity of air travel as well.  HVO presents some of the lowest barriers to aviation decarbonization from a technological complexity and capital intensity standpoint, as well as being an already commercially proliferated technology.  Additionally, unlike electrification of road vehicles, or the use of biodiesel in shipping, the aviation industry needs a product that performs, essentially, exactly as conventional jet fuel does.  Setting aside the trillions of dollars of sunken capital currently invested in existing airline fleets and the infrastructure supporting them, the general consensus is that current alternatives presented to liquid jet fuels (e.g. hydrogen and electrification) have some potential for niche applications (e.g. short commuter flights), but do not have the appropriate characteristics to be reasonably used for a majority of commercial air travel and shipping.  Accordingly, the potential scale of demand for renewable drop-in jet fuel solutions is very large, particularly given the increasing willingness of governments to countenance the introduction of mandated levels of renewable jet fuel consumption (as evidenced by the EU’s RefuelEU policy package and others).

The HVO route is only one of a range of pathways to such a liquid fuel solution, as shown in the Figure below.  HVO is the only one-step solution shown (hydroprocessed esters and fatty acids, or HEFA), and the only one that  is commercially prepared – or will be – to offer significant volumes to the aviation industry in the short term.  However, other routes, such as ATJ and biomass gasification,  are showing increasing promise and offer the potential of wider intake of waste-based feedstocks. 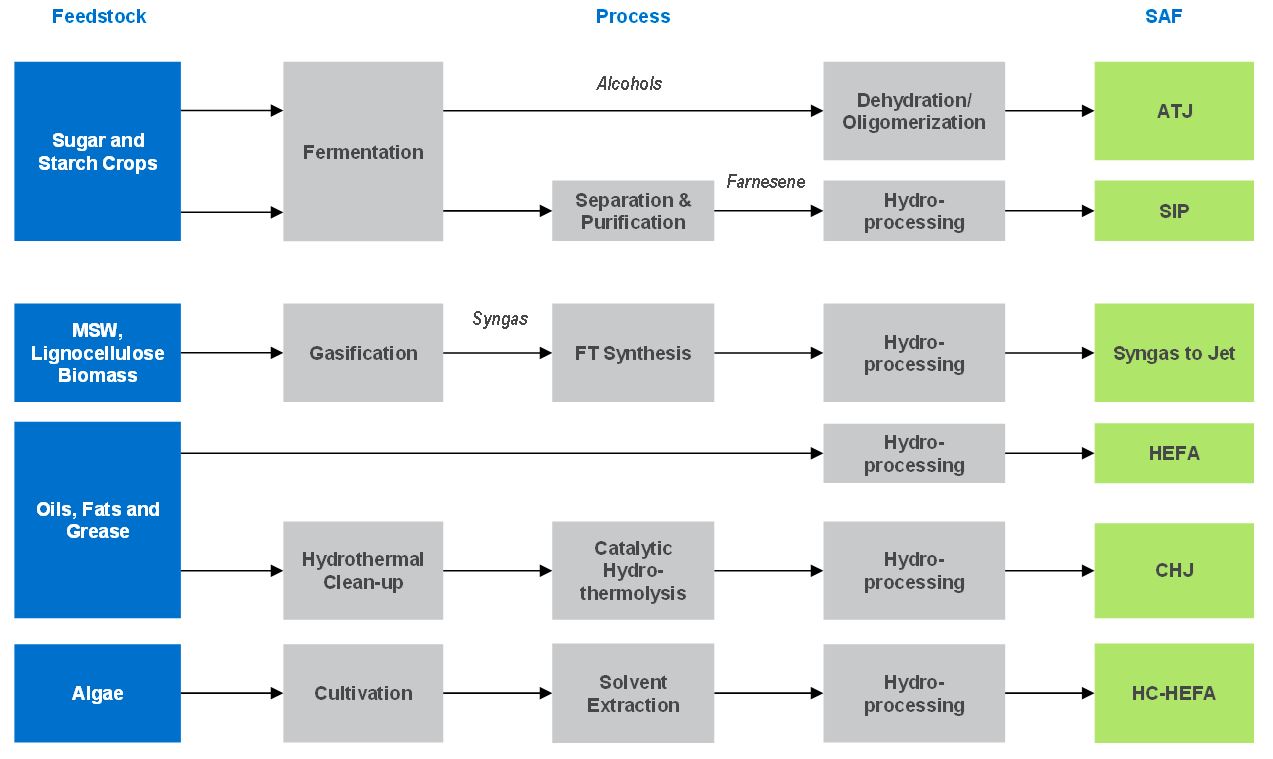 Biorenewable Insights: Sustainable Aviation Fuels (SAF) – 2021 provides analysis of several HVO (including technologies developed by Neste, Haldor Topsoe, UOP, Axens, as well as others) and other emerging SAF technologies (e.g., ATJ, FT, Pyrolysis, etc).  Process descriptions, cost of production models, and a capacity analysis are included.  Economics for all products are prepared on a total hydrocarbons produced basis, to evenly distribute the production cost and capital burden across all products.

Cost Curve Analysis: Hydrotreated Vegetable Oils (HVO) – 2021 compares HVO plant cost of production with plant capacity and assembles them into an insightful cost curve that shows the relative competitiveness of producers, different regions, and general characteristics of the market.  The interactive cost curve model combines operating plant details and market data from the Market Insights report with process technology and production cost information from NexantECA’s Biorenewable Insights services to provide an understanding of how feedstock selection, market destination, and process technology impact the cost competitiveness and profitability of industry participants both historically and on a forecast basis.