Wishcycling: Does it hinder plastic recycling? 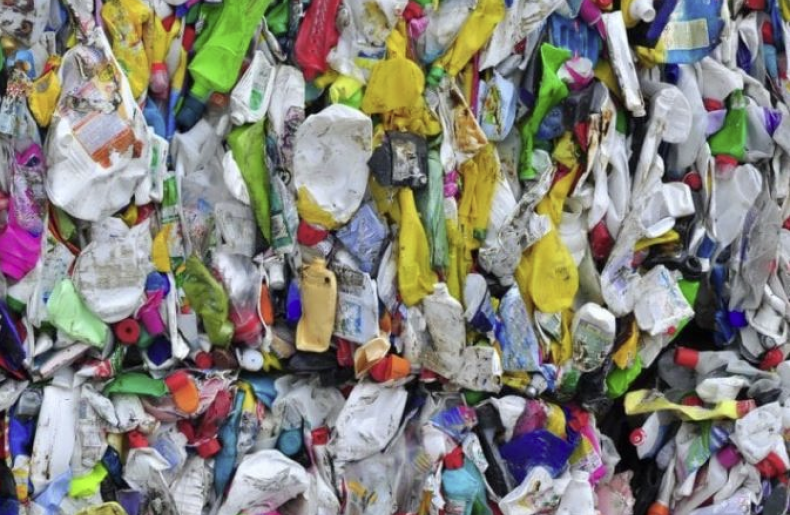 While mounting environmental campaigns have encouraged consumers to continually increase levels of recycling, studies estimate that only about 9 percent of all plastic waste ever produced has been recycled. Wishcycling – the practice of placing an item in a recycling bin with the well-intentioned belief that the item is recyclable, even though it's not – may actually hinder recycling.

WHAT HAPPENS TO RECYCLING WASTE?

When you place an item in the recycling bin, little thought is given to the multiple processing stages required to reuse the waste into new products on store shelves. The waste materials in our recycling bins are regularly collected and transported to a transfer station. From here, larger quantities of waste are transferred to sorting facilities called Material Recovery Facilities (MRFs), where the waste is separated into individual waste streams for transportation to the recycling facilities before it can be incorporated into new products.

It is at the MRF where the impact of wishcycling can be observed. While the packaging label might suggest it is recyclable, it does not mean your local authority will accept the item. Accepted materials can vary significantly from one region to the next, with one local authority’s recycling being another’s general waste. This has resulted in single-stream recycling contamination levels entering MRFs of approximately 17 percent in the U.S. and approximately 12 percent in the UK, demonstrating the importance to always check your local rules.

MRFs act as an intermediate processing step between the collection of MSW and the sale of recyclable materials to end-user manufacturers. They are specialised processing plants consisting mostly of mechanical materials handling and separation/sorting unit operations. They produce highly separated streams of recyclable materials at a high speed to recover the maximum value from materials in the MSW stream for recycling. Residual streams from MRFs may include food and garden waste, paper and cardboard, wood, rubber, textiles, miscellaneous plastics, waxes, wood, etc. 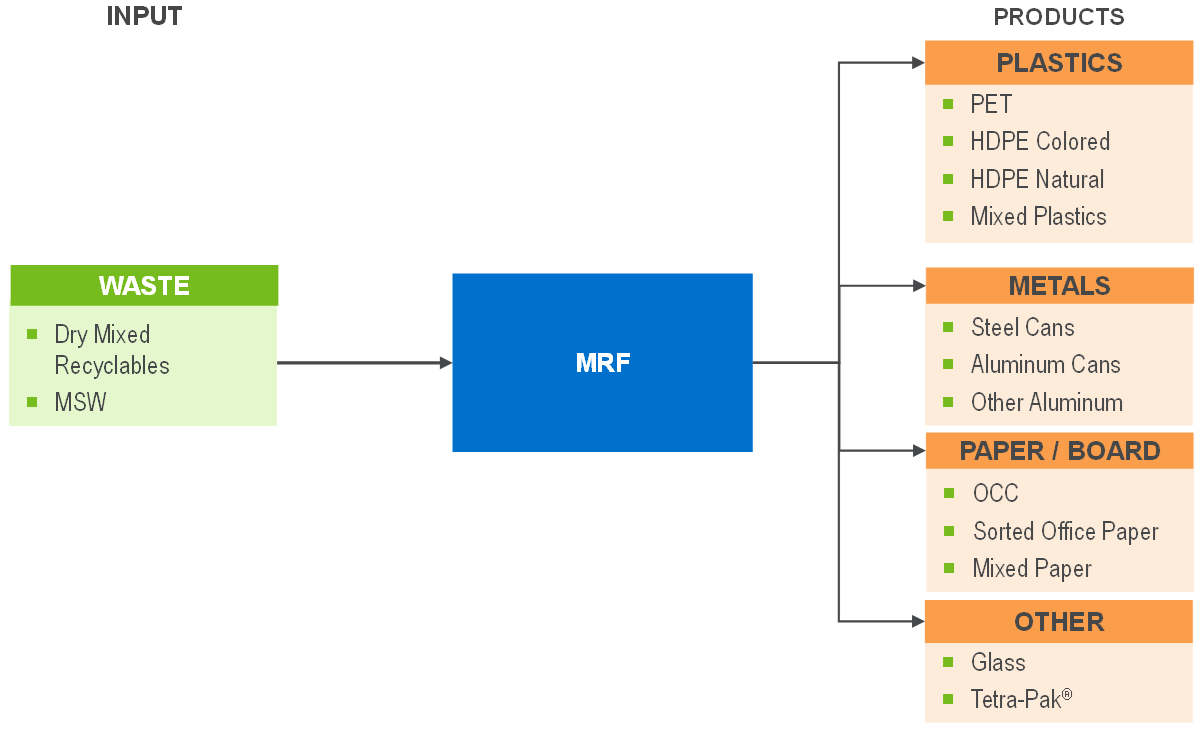 MRFs are often found in two forms, but they can also be found in a hybrid of the following types:

MRF configurations vary largely depending on the waste type entering the facility, itself vulnerable to wishcyclers and other authority’s decisions, as well as the desired end-product contamination levels.  Despite this they generally follow similar processes to separate the waste.  “Clean” MRFs are more predominant due to reduced feedstock contamination levels compared to “dirty” MRFs.  This enables increased separation efficiency and higher value recyclable products.

Manual pre-sorting is required to address wishcycling as well as constraints in the waste separation process often caused by the complexity of waste materials.  This is a labour-intensive task that has a difficult working environment.  Broken glass and aerosol cans often found in the waste stream pose significant safety concerns to the workers: broken glass has the potential to injure workers, while aerosol cans can cause fires, become propellants, and can explode.

Well-intended consumers may like to be made aware their good intentions could be hindering recycling efforts, and this can be done by checking the local authority’s recycling guidelines online.  While most waste materials are easy to separate at source, one of the major materials still wishcycled is plastic.  There is often a range of recycling symbols on plastic packaging, which indicate that the packaging can be recycled, however it doesn’t mean it is accepted for recycling by your local authority/MRF.  This is a source of major confusion among consumers, with daily items such as plastic cutlery, plastic film (carrier bags and frozen food bags), and crisp packets often ending up in the recycling bin.  Similarly, paper-based ice cream tubs, disposable coffee cups, and containers such as pringle pots cause a further problem because they often consist of more than one material. 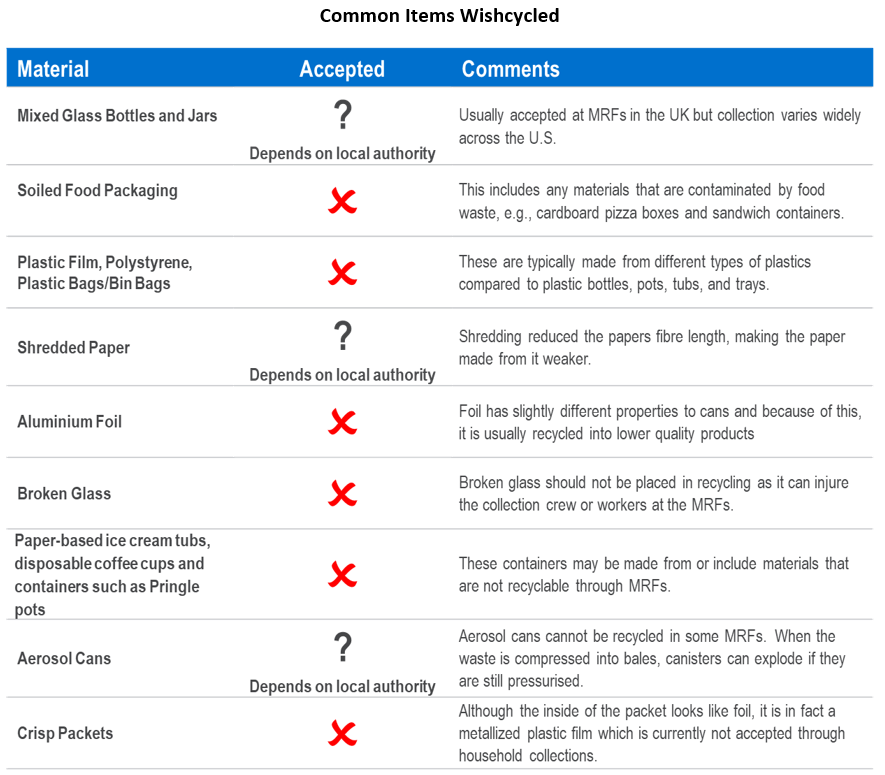 While most plastic items can be recycled, many are not accepted by MRFs because of the challenges to effectively separate the materials and/or contamination in the final sorted waste streams.  This results in downtime of the facilities; and impacts the MRF economics.  Few commonly used items that have a key impact on the performance and therefore recycling efficiency include:

MRFs continue to implement various sorting and emerging technologies such as artificial intelligence, and manual quality control measures to ensure the facilities can run smoothly, meet the quality standards required by the recycling facilities that will process the recovered waste plastics further, and increase the acceptable waste to bridge the gap between wishcycling and effective recycling.

More details on the limitations of MRFs operations and the technology are included in NexantECAs recent report, as part of our TECH series on energy and chemicals technoeconomics.  The report, entitled Materials Recovery Facilities for Plastic Waste TECH report, provides a detailed discussion on MSW (Municipal Solid Waste), MRF technologies key equipment providers, MRF economics, and a commercial overview of MRF infrastructure.