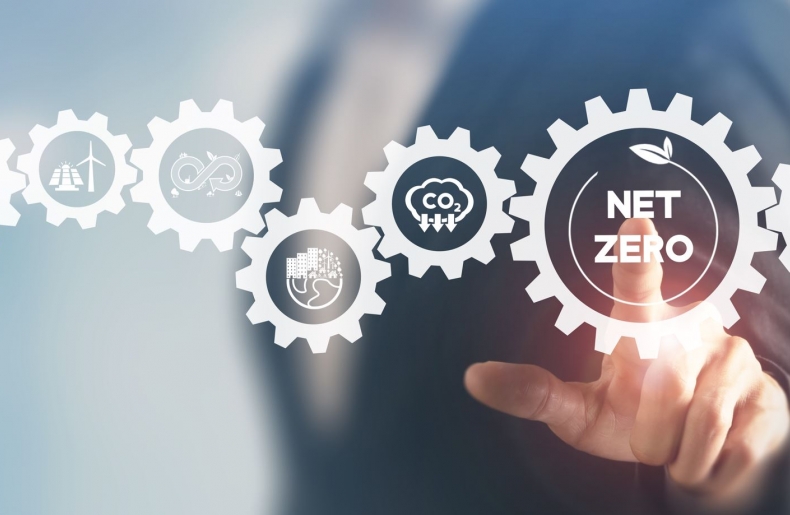 Like many chemicals and fuels, propane is at a crossroads.  As is happening for other fuels and chemicals currently, the propane industry is exploring options for increasing the sustainability of their product.  There are several technically feasible options for producing on-purpose bio-propane at a likely reduced carbon footprint to current production, however the competitiveness of many of these routes is unlikely for a number of reasons.  The fate of bio-propane much like conventional propane, is driven by its position as a byproduct; however, there may be some pragmatic approaches for reducing propane’s carbon intensity.

The focus of sustainability has shifted in the past decade to a carbon intensity based model, based upon the emissions resulting from the production of the product.  Carbon Intensity, a new concept to many in the petrochemical industry, is the measure of how much carbon dioxide equivalent emissions are released per unit of product (ton, MJ, or MWh, depending on if it is a chemical, fuel, or electric power).  This puts emissions from each process on the same basis and makes sustainability efforts difficult to greenwash.  Increasingly, many major market players including most international energy companies, chemical companies, and logistics and shipping companies have stated intentions of reducing their carbon intensity.   Many players have stated ambitions of “net zero” based upon their Scope 1 and Scope 2 combined emissions (also referred to as production emissions) as defined by the global standard of the Greenhouse Gas Protocol.  The different types of emissions are defined and illustrated in the figure below:

Not all of today’s fossil fuel-based processes and infrastructure can be brought into the 21st century intact.  While many fuels may be able to adapt to other sources, others face major challenges.  Among these is propane.  While it is an undoubtedly important fuel, in a net zero future propane supplies will prove constrained compared to today’s production.  While there may be byproduct bio-propane around, on-purpose low carbon propane faces significant and fundamental hurdles.

As well as bringing the heat to backyard barbecues, propane has been a vehicle fuel for decades.  As a chemical feedstock, it is used to produce propylene an important olefin and part of the backbone of the chemical industry.  As much of the rest of the energy and chemical industry becomes increasingly focused on sustainability, propane industry players are attempting an uphill climb to decarbonize as well.   There is significant demand for low carbon intensity propane (particularly in the US and EU), but limited supply.  Bio-replacement is especially difficult, because of the relatively low value of propane compared to many other fuels—which can be twice as much as propane or more (and in the case of high demand biofuels such as SAF several times more).  While this was one of the key features that has helped to sell propane fuels for vehicles (particularly for rural communities and farms), it does not leave very much room for a bio-replacement to cost effectively be produced in an on-purpose fashion.   A lot of this comes from the way fossil-based propane is produced--conventional fossil-based propane is a byproduct of conventional natural gas processing and oil refining.  This means that for most conventional propane production, there are not many options to reduce carbon intensity beyond a ‘wait and see approach’ of what refiners and gas processors will do except for looking to bio-propane—and many do not want to risk being left behind.  Refiners and processors are increasingly turning to carbon capture as a means to lower carbon intensity, however biofeedstocks and electrofuels offer the potential for significantly larger carbon intensity reductions.    Additionally, the single largest threat to conventional fuels and refined products market demand, electrification, looms large over the future of propane end uses as well.  Heating, power generation, and vehicle applications of propane face the same substitution threats with renewable power and alternative technologies that conventional fuels such as diesel and gasoline face— exceedingly low carbon intensity to compete with.  The application that has a much higher hurdle to supply in this fashion would be propylene—however not impossible as e-methanol is produced from CO2 and renewable power in Iceland (by CRI International), and this could be used as feedstock for a methanol to olefins and/or propylene process (of which there are multiple to choose from—mostly in China).

Byproduct Bio-Propane: Along for the Ride with SAF and Renewable Diesel

Similarly, to conventional fossil-based propane, many of the most competitive routes to bio-propane will be byproduct in nature.  These are the low hanging fruits—and particularly if paired with higher value products, bio-propane may economically be produced and sold.  Several of these options have already begun to emerge, and volumes of bio-propane and bio-LPG are being produced and sold—particularly the byproduct of the HVO route to renewable diesel and SAF.

However, this is not necessarily as much of a boon for bio-propane as it could be as the low value of the fuel has led some to maximize value in other ways: minimizing the carbon intensity of the higher-value fractions at the expense of the LPG fraction.  As hydrogen has the highest carbon intensity of any of the consumables in HVO process, some developers of new projects are focusing on the LPG and naphtha fractions as feedstocks for the hydrogen production.  This minimization of the carbon intensity allows the maximum value to be obtained for the renewable diesel and SAF fractions and their resulting LCFS credits which make up the bulk of the produced fuels.   Other emerging technologies that may produce byproduct LPG include ATJ (alcohol to jet) technologies and FT liquids (Fischer Tropsch) production.   The current high focus on SAF and renewable diesel production means that significant quantities of bio-propane should become available in the future—however this is still a small fraction of the overall propane market.

Bio-Propane Intermediates: If You Can Make Them, Stop There

The main stumbling block before many of the on-purpose routes is that the intermediate required to be converted to propane is generally of significantly higher value than the propane.  Unless there is a value to the carbon intensity reduction (as is the case in a few programs such as the LCFS in California) or a significant market premium for the bio-based alternative, many of these fail to capture the value that would be obtained if the direct intermediate before propane would be sold. The one advantage propane has over many of these is that it has a significantly larger market.  Several key intermediates that can be converted to propane or propane alternatives include: methanol/DME, propanols, sugars (fermentation directly, catalysis directly, or fermentation to other intermediates), and glycerine.   All of these are already priced above the price of propane—particularly when you factor in the fact that each of these contain at least one oxygen atom that propane does not, which in the case of all but DME must be eliminated from the molecule to produce propane--sugar and glycerine have the most oxygen that must be removed as they have a 1:1 ratio of carbon to oxygen. NexantECA has provided the expected indicative raw material costs and CI reductions for each of these routes and provided the breakeven CO2 value and CO2 reduction values required for competitiveness at the $50 per ton (approximate recent low level of the EU ETS) and $200 per ton (approximate high level of the LCFS) levels. 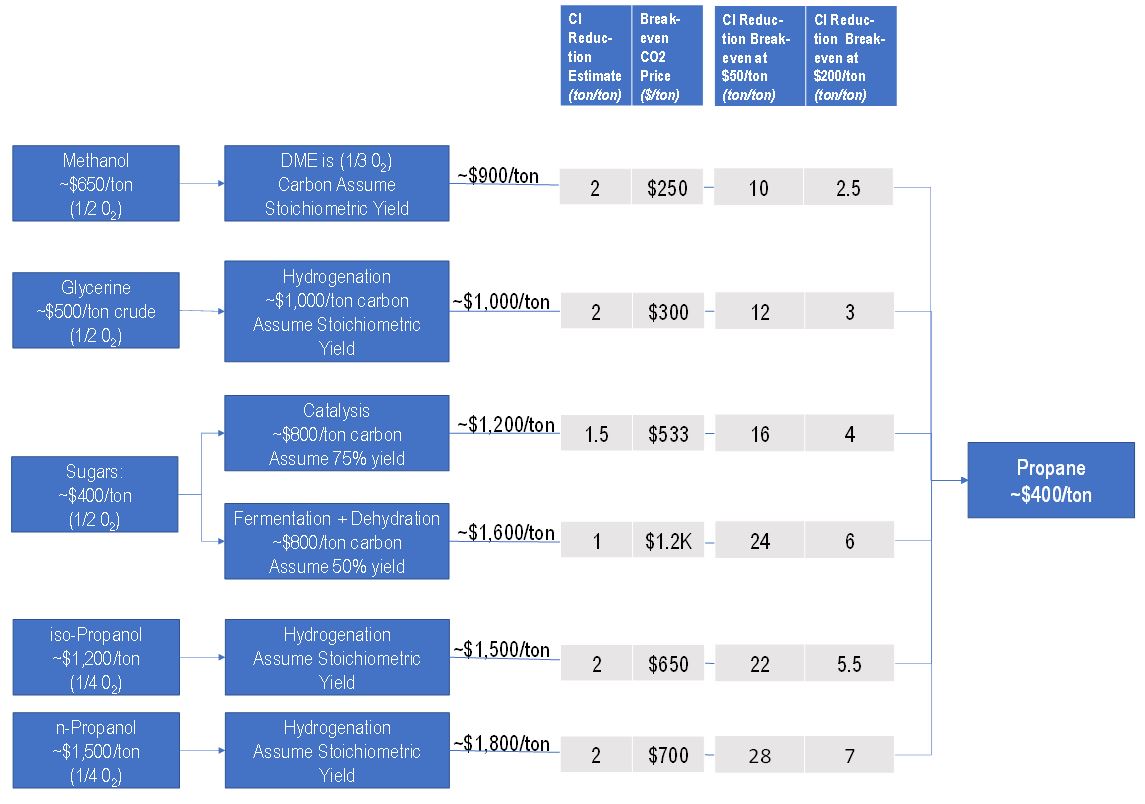 While the obvious answer is to go to lower value feedstocks, the problem remains that most routes from lower value feedstocks (such as biomass) will still likely have these intermediates as part of the pathway—and there will be more money to be made in selling the intermediates in the near term.  For now, despite the demand for bio-propane, it is clear that there remains a gap between the price that the fuel can command and available supplies.  The future, however, may hold a few different scenarios:

The reality is most likely to be some combination of these outcomes in the short and medium term, however ultimately in the long term many propane applications will likely fall to electrification and other changes in technology—the real question will be how long until this happens and what do we do until we get there.

The Current Path Forward With rDME

Suburban Propane is one propane industry player that has viewed the options and bet on rDME. Suburban Propane has both invested in Oberon (a bio-DME producer) and as of April 2022 is offering a blend of rDME and propane (with rDME from Oberon) in California that they claim reduces carbon footprint by 60 percent.  From the values shown in this analysis, DME is the most reasonable on-purpose propane substitute from an economic standpoint—however it does have one key drawback: it’s not propane.  DME is blended with propane—which means that you still need propane.  While this can reduce emissions and the amount of fossil-based propane consumed, it is not a complete solution for net zero emissions on its own.  Much like ethanol in gasoline, it is a step in the right direction and a bridge to the future, but not a panacea—but an important distinction to the renewable space is that these technologies are not competing with each other, but together competing against higher carbon intensity fossil-based products.  Radical changes to the conventional industry, rDME, byproduct biopropane, and electrification will all be required to get to net zero by 2050.

Biorenewable Insights (BI), provides in-depth evaluations and reliable data on the technology, cost competitiveness and business developments of biorenewable chemicals and fuels.  BI was created in response to the increasing activity in this industry segment in recent years, including entrances and exits of players, emergence and commercialization of new technologies, feedstocks, product types, as well as growing interest from companies in the oil, chemical, financial and other sectors.