Elephant in the room: Emerging lithium​ technologies and energy consumption​ 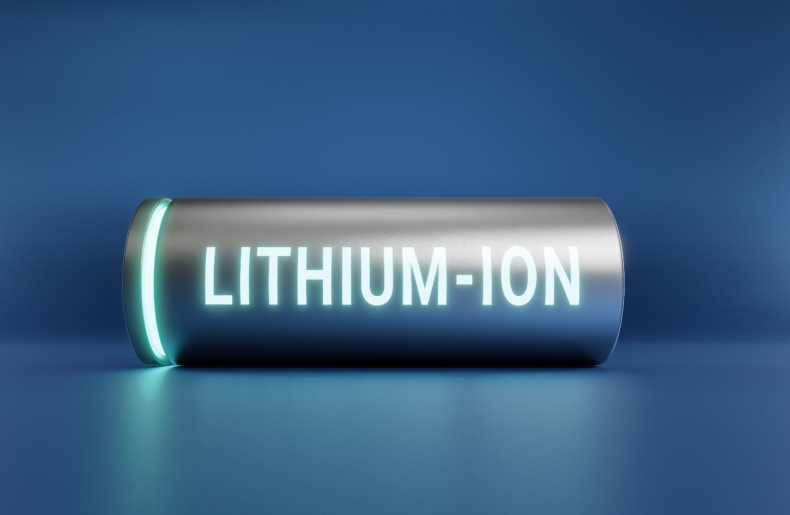 The growth in demand for lithium coupled with supply challenges, has resulted in the price per ton of lithium carbonate equivalent (LCE) exceeding US$70,000 in August 2022 – a 10x price increase from January 2021. Investors have aptly dubbed the material “white gold”, with a “gold rush” underway to expand existing production and develop new lithium deposits globally.  ​

The push for new production has resulted in emerging technologies to extract lithium from either brine or hard rock resources. As well as increasing production, these technologies are designed to improve the sustainability of these processes by reducing the need for solar evaporation, reducing reagent consumption and improving water consumption.​

However, they also consume more energy compared to the conventional options, so it begs the question, is increased energy consumption a necessary evil? ​

The majority of commercial lithium production from salt lake brines is via solar evaporation. Large pond systems are used to concentrate the lithium in the brine by evaporation which also enables the crystallization and removal of non-lithium salts due to differing solubilities. This process is referred to as solar beneficiation. ​

The resulting concentrated brine (typical lithium concentration of six percent by weight) is further purified and converted into lithium carbonate and subsequently derivatives such as lithium hydroxide monohydrate. ​

However, conventional technologies for lithium extraction in both brine and hard-rock resources have their limitations which has led to large investment in newer methods of extraction.  ​

The three key themes for emerging lithium technology development include:​

The technical principles of emerging technologies

For extraction of lithium from brines, most developers have opted for Direct Lithium Extraction (DLE) to combat the failings of conventional technologies. DLE technologies can be grouped into three main categories: adsorption, ion exchange, and solvent extraction. These processes selectively extract lithium from a brine using a sorbent, ion exchange material or solvent and then recover the lithium using a “strip solution” e.g., water or acid, without the need for solar beneficiation. ​

Nanofiltration is also being used by some technology developers, which utilizes monovalent ion selective membranes (lithium and sodium) and high pressure to separate impurities ions from the brine. ​

The lithium enriched solution generated by these technologies is then purified and treated with sodium carbonate to produce lithium carbonate. Alternatively, the purified lithium concentrate can be converted directly to lithium hydroxide using bipolar electrodialysis (BPED), which combines ion separation and electrolysis of water. ​

DLE processes are being developed for a range of brines including geothermal, petroleum and salar brines.  Geothermal and petroleum brines typically require extensive pre-treatment with geothermal typically containing high concentrations of dissolved iron, manganese and silica which can cause scaling of equipment.  Petroleum brines can​​

be more complex to handle, primarily due to hydrocarbon contamination and the presence of dissolved hydrogen sulfide. Some petrobrine developers are offering wastewater treatment services in combination with lithium extraction to offset high processing costs, eliminating the need to re-inject the petrobrine.​

Livent is the only lithium major commercially producing lithium carbonate using DLE at its Fénix plant in Argentina’s Salar del Hombre Muerto. Despite the use of DLE, Livent’s process is reliant on 45 hectares of brine “finishing ponds” post-DLE and could therefore be termed a first generation DLE.​

Emerging hard rock technologies are being developed to exploit unconventional resources, and the process novelty is focused on the front end roasting and/or leaching of the mineral concentrate.  Due to the lower amounts of lithium present in the deposit as well, leaching extracts greater amounts of impurities which typically results in more complex and costly downstream purification of the leachate.  Some developers are offsetting this cost by producing saleable byproducts, such as sulfate of potash and rubidium and caesium salts.​

There are no producers using non-conventional hard-rock technologies currently, with the furthest along the development curve being Bacanora in Mexico and Lepidico in the United Arab Emirates.

The energy consumption of emerging technologies​ 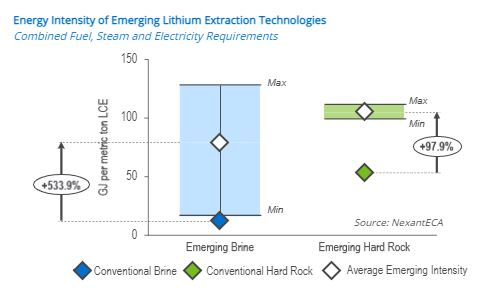 However, many DLE processes require heating of the brine prior to contact with the lithium capture material in addition to heating of the “strip solution” to recover the lithium. Whilst some developers intend to utilize ambient temperatures, the lithium recovery rates are likely to be impacted. Furthermore, the negation of solar beneficiation after DLE would require concentration of the brine by thermal evaporation whilst use of BPED also incurs high electricity consumption.​

An interesting synergy can be found with geothermal brines (minimum emerging brine in chart), where the high temperature eliminates heating requirements in addition to providing a renewable energy source to drive the overall process. However, these resources can be more capital intensive to exploit. Furthermore, geothermal brines are typically lower in lithium compared to salar (approximately one third depending on resource). ​

For emerging hard rock processes, the greater quantities of impurities due to lower grade deposits result in more complex and therefore energy intensive purification steps (e.g., multiple evaporative crystallizations). A technology avoiding these purification steps has not yet been developed.​

Conventional brine processes clearly benefit from the solar beneficiation ponds, which both concentrate and, to an extent, purify the brine.  In the hard rock sector, the conventional technologies benefit from feedstocks with lower impurities.  However, there are limitations of both conventional routes which can damage the local environment.​

While the emerging routes can tackle these issues, the increased energy consumption presents carbon intensity, cost and logistical issues for producers. In a world of elevated gas prices and a drive to decarbonize, a difficult decision must be made.