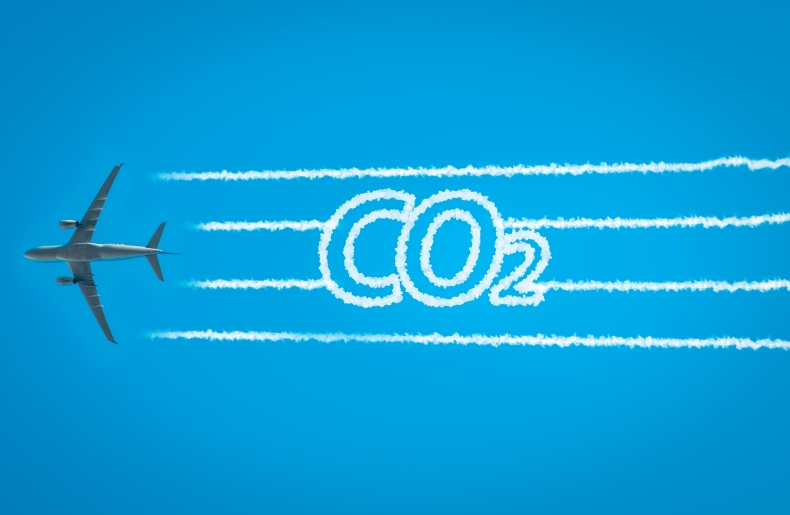 In October 2021 the International Air Transport Association (IATA), consisting of 290 airlines and comprising of 82 percent of the global air traffic, has announced the target of Net Zero carbon emissions from the global air transport industry by 2050. The announcement at IATA’s 2021 Annual Global Meeting represents a major stepping up of the organisation’s decarbonisation ambitions, amid growing global urgency over the need to limit climate change to 1.5 degrees, in line with the Paris Agreement, and follows a number of recent governmental policy measures aimed at the decarbonization of the aviation industry. NexantECA has summarised the potential pathway to this ambitious target and the various initiatives designed to facilitate it.

The aviation industry was estimated to have generated over 900 million tons CO2 equivalent (CO2e) of greenhouse gas emissions in 2019, around two percent of the global total.  Despite the impact of the COVID 19 pandemic in 2020 and 2021, projected long term rises in passenger numbers mean the sector’s share of total emissions is forecast to grow to five percent by 2050.   Accordingly, recent years have seen aviation coming under growing pressure to tackle its emissions, as governments around the world ramp up increasingly ambitious decarbonisation strategies with a view to limiting global temperature change to within the IPCC’s 1.5 degree target. However, air travel faces a number of barriers to “easy” decarbonisation, related to its highly capital-intensive nature and global spread.

While many industries have a range of cost-effective options available to reduce carbon emissions in the short term, aviation does not, being characterised by long-lived assets (aircraft typically have a lifetime of 25-30 years) and sunken capital (aircraft cost hundreds of millions of dollars).  The sector also faces specific safety issues that further discourage rapid shifts to new, and less proven, fuels and technologies.  Therefore, solutions to aviation’s emissions problem must, in the short to medium term at least, be compatible with existing infrastructure and equipment.

At present, sustainable aviation fuels (SAF), including advanced biofuels and electro-fuels, are the only practical replacement for crude oil-derived kerosene, as electric and hydrogen fuel cell propulsion do not currently have the required energy density to be realistic options, and are unlikely to make sufficient progress in this regard in the short-to-medium term, if at all.  However, there is currently a limited market for SAF and the price gap with conventional fuels is significant. Although production is currently scaling up rapidly, mainly through a raft of HVO/HEFA projects in the U.S. and Europe, current projections do imply a share of global jet fuel demand only approaching two percent by 2030.  Although costs will decrease with the scale up of production, SAF is unlikely to achieve price competitiveness with petroleum-derived jet fuel, and significantly increased use will remain dependent on policy support.

Many of the policy measures used by governments to enforce lower emissions from the ground transport sector – notably including fuel taxes and mandates – have historically been seen as harder to enforce on a global industry without the agreement and participation of large numbers of governments.  However, the last decade has seen increasing governmental efforts in this regard, led by the European Union, which brought aviation under the scope of its Emissions Trading Scheme (ETS) in 2012, albeit to a limited extent.  In 2021, the EU announced the ReFuelEU initiative, as part of its wider efforts to achieve net zero emissions by 2050 (the Fit for 55 policy package), which will include mandatory SAF blending in jet fuels and programmes to facilitate SAF production. ReFuelEU will put obligations on both fuel suppliers to distribute jet fuel with a specified SAF content and on airlines to uptake jet fuel containing SAF.  The initiative will also facilitate the SAF certification process, establish alliances with fuel producers and airlines to support renewable and low carbon Fuels and steer EU funding towards SAF deployment. The EU has estimated that the ReFuelEU initiative will result in an emissions reduction of 60 percent by 2050 in comparison to 2020, saving some €87 billion in carbon offsetting costs.

Elsewhere, the United Kingdom has set a more ambitious target of reaching net zero carbon emissions by 2050 whilst accommodating a 70 percent growth in passenger numbers, with potential pathways to this end, as detailed in the government’s “Decarbonisation Road-Map: A Path to Net Zero”, including a combination of improvement in aircraft efficiency, introduction of mandatory SAF blending, implementation of carbon offset schemes and optimisation of airspace route networks and ground operations.  As of 2021, the UK is consulting with stakeholders on the implementation of SAF mandates along the lines of those proposed by the EU. In the United States, a Sustainable Aviation Fuel Act was introduced to the House of Representatives in early 2021, as part of the Biden Administration’s efforts to address climate change. The bill envisages a national goal of a net 35 percent reduction in greenhouse gas emissions, compared to 2005 levels, from flights by 2035, and net zero emissions by 2050. The EPA (Environmental Protection Agency) would establish yearly regulations for the carbon intensity (greenhouse gas emissions per unit of energy) for aviation fuels by 20 percent in 2030 and by 50 percent in 2050 compared to the 2005 baseline. To achieve these targets the bill aims to incentivize SAF producers by creating a grant program to expand the number of production facilities and build supporting infrastructure.  A tax credit of around US$1.50 per gallon has been proposed for SAF blenders to subsidise production and the department of Energy and Agriculture will be directed to research SAF feedstock to further support the growing industry. Aside from commercial planes, the bill is expected to be applicable to US military aircraft which will be expected to increase their SAF utilisation by 10 percent by 2024. However, it should be noted that the bill has not passed the House of Representatives and therefore is not law in the United States.

Meanwhile, the aviation sector itself has begun to make concrete efforts on decarbonisation, through industry groupings such as IATA and the UN’s International Commercial Aviation Organisation (ICAO – 193 member states).

In 2009, IATA set out a target of capping CO2 emissions from aviation at their 2019 levels, resulting in “carbon neutral growth” and reducing them by 50 percent relative to 2005 levels by 2050.  However, in common with government policy measures, growing urgency over the need to limit climate change to 1.5 degrees, in line with the Paris Agreement, has spurred increased ambitions; IATA’s 2021 Annual Global Meeting, in October 2021, agreed to raise the industry’s 2050 target to achieving net zero emissions.

IATA’s targets are intended to be met initially through the first global Carbon Offsetting Scheme for International Aviation (CORSIA), which was introduced by the ICAO in 2016 with the aim of stabilising emissions at their 2019 level.  CORSIA will be mandatory for all member states from 2026 following a voluntary period (2021 to 2026).  Aircraft operators will be required to purchase emission units to offset any increase in annual CO­2 emissions above a 2019 baseline.  The emission units will be purchased from six approved non-profit programmes which will offset the excess carbon emissions by various projects ranging from carbon capture to restoration of rainforest.  As air travel continues to grow, the cost of the emission units is expected to drive growth in SAF consumption in the medium to long term.

While specific measures to meet the subsequently desired reduction of emissions to net zero are as yet unclear, IATA states that SAF will account for 65% of reductions, and hydrogen or electric propulsion for 13%, both of which will necessitate very significant advances in technology, production scale and governmental support.

The new IATA target is by necessity ambitious, and actual success in achieving it will depend on the participation of a large proportion of developed and developing countries, including particularly large markets such as China. IATA expects that China will surpass the United States as the world’s largest passenger market by 2029 as Chinese domestic flights continue to increase following urban migration and increasing average wealth. The recent announcement of the IATA 2050 Net Zero target has faced opposition from Chinese Airlines, who lobbied for the target to be pushed back to 2060 in line with Chinese government’s recent carbon neutral pledge. China Eastern, one of China's "big-three" state carriers and the world's fourth-largest domestic operator, stated that IATA should recognize specific challenges for developing countries and provide more industry support or time to meet decarbonisation targets. China does not presently have governmental policy for the decarbonisation of the aviation industry aligned to its 2060 net zero target.

Airlines have started to react to the various initiatives and emission commitments, and collaboration between airlines and advanced fuel producers has been initiated, including International Airlines Group (IAG) with Velocys and United Airlines with Fulcrum, to facilitate the development, research, and commercialisation of SAF. However, despite such efforts, the feasibility of bringing sufficient volumes of SAF to market to meet steadily increasing emissions targets is not certain, and in the short term, decarbonisation of the aviation industry will rely on the offset of carbon emissions and increases in fuel efficiency from the optimisation of operations and replacement of older aircraft.

Biorenewable Insights: Sustainable Aviation Fuel  provides analysis of several HVO (including technologies developed by Neste, Haldor Topsoe, UOP, Axens, as well as others) and other emerging SAF technologies (e.g., ATJ, FT, Pyrolysis, etc).  Process descriptions, cost of production models, and a capacity analysis are included.  Economics for all products are prepared on a total hydrocarbons produced basis, to evenly distribute the production cost and capital burden across all products.

Cost Curve Analysis: Hydrotreated Vegetable Oils (HVO) – 2021 compares HVO plant cost of production with plant capacity and assembles them into an insightful cost curve that shows the relative competitiveness of producers, different regions, and general characteristics of the market.  The interactive cost curve model combines operating plant details and market data from the Market Insights report with process technology and production cost information from NexantECA’s Biorenewable Insights services to provide an understanding of how feedstock selection, market destination, and process technology impact the cost competitiveness and profitability of industry participants both historically and on a forecast basis.