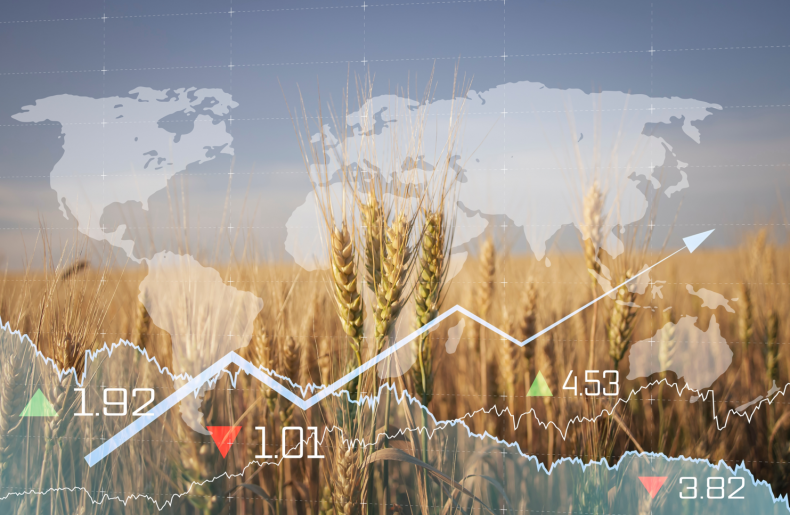 The development of the ammonia synthesis process in the early 20th century, known as the Haber–Bosch process, was a landmark in the history of the chemical industry.  The global population was previously limited to naturally available fertilizer for crop production prior to the 1930s.  Invention of the ammonia synthesis process promoted extensive expansion of the agricultural industry, enabling increased global production of crops.

Ammonia is now one of the most synthesised chemicals in the world and global ammonia production in 2021 was over 188 million tons.  Over 80 percent of this ammonia was consumed in the production of fertilizers such as urea or ammonium nitrate. The production of ammonia is predominantly achieved through the steam reforming of methane or the gasification of coal to produce synthesis gas to feed into ammonia synthesis via the Haber Bosch process (grey ammonia).

Ammonia production is highly energy intensive and due to the massive annual production accounts for 1.8 percent of global carbon dioxide emissions.  The global demand for agricultural products and fertilizer is still growing as the global population increases at around 75 to 80 million people per year and agricultural sectors in developing nations mature. Therefore, emissions from the inorganic fertilizer sector are expected to continue to grow unless a carbon neutrality plan is developed and implemented. 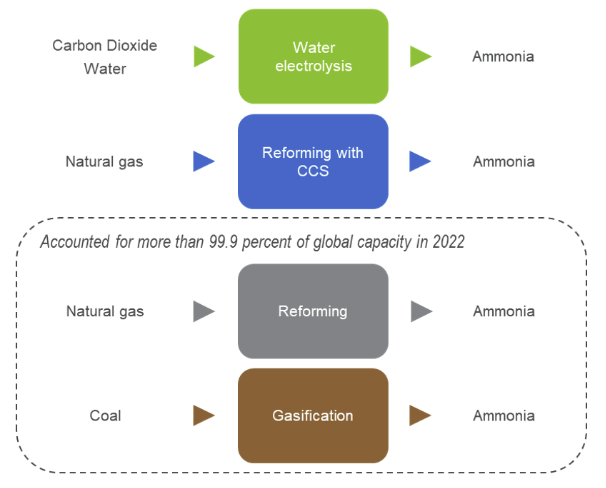 A significant reduction in the carbon intensity of ammonia and fertilizer production is possible by addition of a carbon capture storage technology (blue ammonia) to the SMR process or the production of hydrogen via an electrolyser using renewable energy (green ammonia) rather than SMR. However, due to the higher capital cost of these plants relative to grey ammonia and perceived novelty, there currently are no commercial scale blue or green ammonia plants.

At present the cost of production of blue and green fertilizer is higher due to additional energy consumption related with blue ammonia or consumption of electricity rather than natural gas in green ammonia production.  So far in 2022, fertilizer consumption in developing nations has dropped compared to last year in reaction to record high natural gas prices and resultant fertilizer price. The switch from more expensive fertilizers, such as urea, to fertilizer with a lower nitrogen content, such as ammonium sulphate, has also been observed. Therefore, a switch to green and blue ammonia and fertilizer could drive a reduction in fertilizer application which would ultimately leads to lower food production.

In addition to the cost of production there are also more challenges when raw material supply chains are considered.  Urea is the worlds most consumed fertilizer and production was over 182 million tons in 2021. 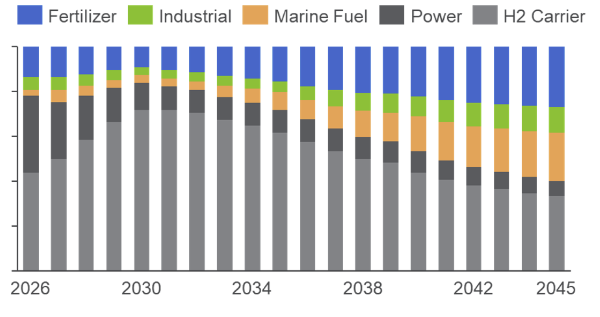 To produce urea, ammonia is combined with carbon dioxide most of which is sourced from the SMR process. To produce green urea from green ammonia, carbon dioxide would need to be sourced from an external supplier. Furthermore, when urea is applied to soil and breaks down to its nutrients the carbon dioxide is released to atmosphere. Therefore, to produce a truly green urea, sustainable carbon dioxide will need to be sourced. The availability of sustainable carbon dioxide and competition with other power to x industries, such as e-methanol, could result in a considerable cost increase in urea or result in a shift to competing fertilizer such as ammonium nitrate.   Whilst other fertilizers are consumed at scale, urea higher nitrogen content than its competitors and good solubility makes transportation and application costs per ton of nutrient relatively low compared to many other fertilizers. Therefore, a reduction in market share will increase the global average fertilizer price per ton of nutrient. 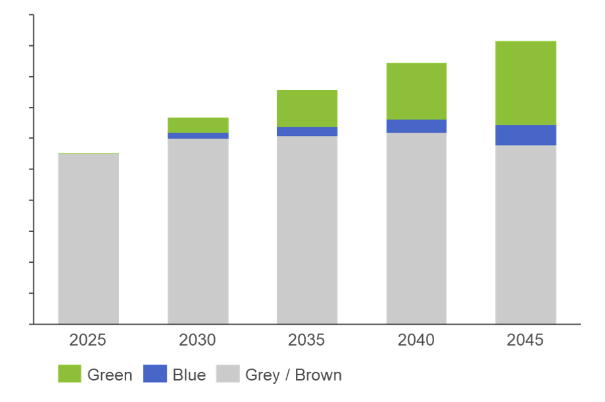 Despite the significant greenhouse gas emissions associated with the production of fertilizers, ammonia could also be part of solution to reach carbon neutrality in other industries.  Ammonia has the potential to be applied as a zero carbon fuel, in the power generation or the shipping industry, or as a vehicle to transport renewable hydrogen. The emerging end uses of ammonia are expected to be more accommodating to the premium associated with blue/green ammonia and could provide a route to large scale blue/green ammonia production. The power generation and marine fuels industries are so large that relatively small amount of penetration into these markets will result in significant additional ammonia demand. This will result in competition for blue/green fertilizer projects in the future and natural gas or renewable energy feedstock. The majority of fertilizer plants are integrated with upstream ammonia plants. The higher capex for an integrated blue/green fertilizer plant compared to an export ammonia facility targeting emerging uses may be harder to justify in the future.

Not only does the decarbonisation of the fertilizer industry present various challenges to food security, including potential increase in fertilizer prices and a reduction in availability of urea, the decarbonisation of other industries could also threaten food security. NexantECA forecast that the penetration of green or blue ammonia into the fertilizer markets will be relatively small in the short to medium term as nations prioritise food security and continue to look to traditional methods of productions. In the longer term as, renewable energy becomes more available at lower cost, electrolysers capital costs reduce and cost of production becomes lower, a higher uptake of green and blue ammonia is expected in non-urea fertilizers. By 2045 NexantECA expect over 30 percent of global green and blue ammonia consumption will be into the production of fertilizers.  However, this will not be sufficient to significantly reduce the greenhouse gas emissions from fertilizer production and actually result in an increase of grey ammonia capacity from today’s capacity.

Market Analytics: Ammonia - 2022 identifies the issues shaping the industry as well as provide demand, supply and net trade data for 40 countries/regions.  Ammonia demand is segmented by key end-use including ammonium nitrate fertilizers, ammonium phosphate fertilizers, direct application fertilizer, industrial, other nitrogen fertilizers, urea, marine fuels and power generation.Consumption: Assesses historic and forecast consumption; forecasts are based on projections of end use and economic activity.Supply: Includes a list of all producers, their production capacity, location, etc., and discussion of the status of new projects.Supply, Demand and Trade: Provides historical analysis and forecasts to 2045 of consumption, production, imports/exports, inventory build-up/decline, capacity and capacity utilization.NexantECA has also utilized its long standing knowledge in the energy and fuels sector to forecast the consumption of ammonia in emerging end uses including marine fuels and power generation.